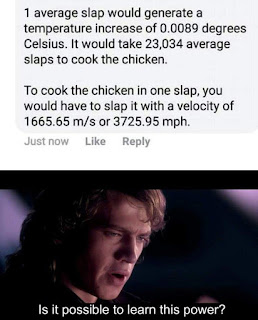 This joke is a meme that is currently popular on the internet. This is an example of humor through absurdity. The humor lies in the fact that cooking a chicken by slapping it at 3725.95 mph (or 1665.65 m/s) is impossible.

Here are a few reasons why:

First, the person slapping the chicken would have to be able to accelerate their hand to nearly mach 5, which is entirely impossible unaided.

Second, if a human's hand were to hit a stationary chicken at that speed, most of the energy would transfer to the chicken as kinetic energy, not heat energy, so instead of a cooked chicken you would get a chicken moving very fast.

If the chicken were held stationary, then both the human's hand and the chicken would be destroyed in the process of them colliding - neither of them could survive the impact. You would end up with chicken mush mixed with human hand mush.

Finally, if you prevented the chicken from moving, and from being destroyed, the heat that is generated would be enough to cook the point of impact to a burnt state, but would likely dissipate before it could transfer through the chicken to cook the entire thing since chickens are not particularly good at conducting heat.

There are probably other reasons why this is absurd, however those are enough for me.

Finally, there is a second reason for this meme being funny - the image appended to the bottom of the quote indicates that Anakin Skywalker wants to learn how to do this. The power to cook a chicken is not something that that character would normally be expected to want. Originally, he wanted to gain power to save his wife from dying, so asking if it were possible to gain the power to slap a chicken and cook it is a pretty humorous juxtaposition.
absurd anakin skywalker chicken juxtaposition meme