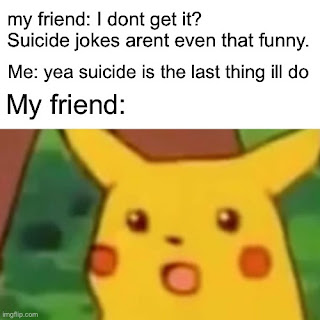 This is a suicide joke and also a surprised pikachu meme. This humor is also self referential, in that it is a suicide joke that talks about suicide jokes. The joke is a pun. Saying something is the "last thing that you will do" colloquially means that you will never do it, however it could also mean (if taken literally) that you will do it last.
So, the ambiguity of the guy's statement is the joke - is he intending to do it last (and not be able to do anything after that because he is dead), or is he not intending to do it at all?
The surprised pikachu indicates that the friend is surprised that talking about suicide jokes caused the person labeled "me" to tell a suicide joke.
This would qualify as a funny meme if the person reading it has a dark sense of humor, and also likes puns.
black black humor colloquial dark meme pun self referential suicide surprised pikachu