Since it is the last day of 2020, I decided to do a series of "2020 summed up" memes for today. There were a lot of choices to pick from, but these resonated with me personally. Please link to any memes that you find that are better in the comments, and I will explain them too. 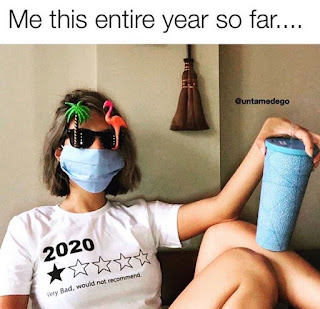 This meme is funny because it indicates that the person that posted it has spent the entire year inside wearing a mask and drinking while complaining about the year. This is funny in a sad-but-true way. 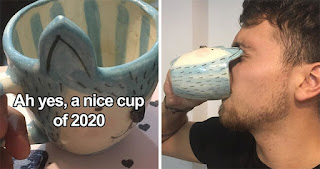 This meme is funny because the way that the person is drinking from the mug would be painful. People getting hurt is funny, so that is part of the humor. The indication is that the year 2020 was also painful. Adding the caption adds some sarcasm to the meme, which is the rest of the humor. 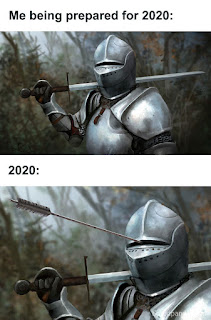 In this meme, the knight seems like he is protected from everything, but gets killed by an arrow going through the one single place that he is not protected. This is ironic because that level of protection should have made him invulnerable to practically every attack. The meme also indicates that the year hit people in unexpected ways. 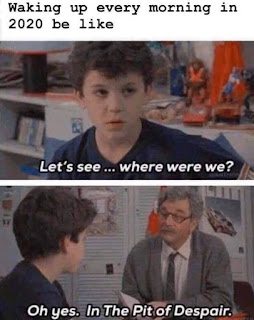 This meme is funny because it compares every day in 2020 to the day in which Wesley was tortured to death in the movie "the Princess Bride". This is an example of hyperbole, because as bad as the year was, this is probably not true - even for people who were actually tortured to death, since that only happened to them once, and unless it happened to them on January first, there were other days that were probably not as bad as that one day was. This might be an example of dark humor, but most of these memes are pretty similar. 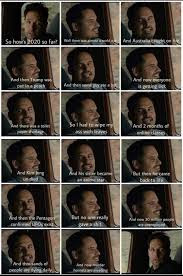 You might have to click on this one to read it - This is a long meme, and that is part of the humor. The humor in this one is that a simple question about how the year is going so far elicited such a long and complex response is some of the humor in the meme. The guy's description of the year is pretty inaccurate, but also covers a decent number of events that people talked about during the year. The real punchline of the joke is the beat panel at the end. The questioner seems to be at a loss for words - probably due to the surprising nature of the response to the question. 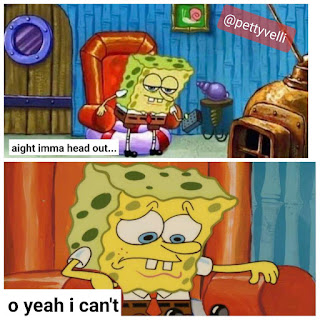 This is the final "2020 summed up" meme that I am going to review. If you were paying attention, you might have noticed that I ended up explaining 6 memes instead of 5. That is because I couldn't narrow it down. There really are a lot of good memes out there summing up the year.

This meme is funny because the "imma head out" meme is usually used when you are done with something, but in this case the meme cannot be used since we are all in quarantine right now, and so it is subverted by the second picture reminding us of this. This is humorous both because of the sad face that spongebob is making, and also because it is sad-but-true.