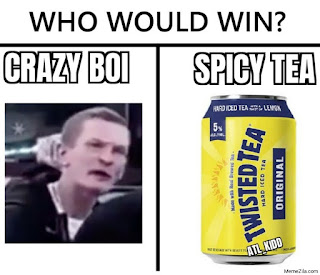 This particular instance of this meme is a joke based on a current event - Apparently there was a video where some jerk got hit in the face with a can of twisted tea after making a racist remark, and people are excited about it right now, so they made a meme because of that.

As is usual for this meme template, the humor in this meme is that you would expect a 'crazy boi' to easily be able to beat some 'spicy tea', but in this instance, the answer is that the tea would win, since in the video the tea is smashed into the face of the 'crazy boi'

Here are a few other instances of the meme:

As you can see, in each one, the smaller or simpler object is the one that wins: the fries win by clogging the heart with cholesterol, the flappy boi attracts more customers than the hired master of marketing, the single pink sock colors all of the laundry pink, and the cigarette kills all of the people that smoke it.