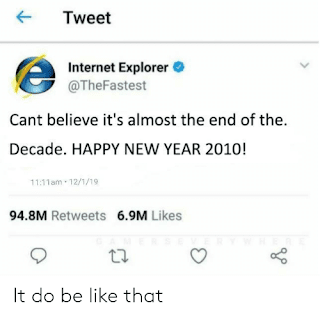 Here is another internet explorer meme - This one is a bit unusual because it has that text below it stating "It do be like that". Apparently the person that posted the meme agreed that it seemed like it was the end of 2010? I am not sure about that because the grammar is pretty bad, but either way, this seems to be someone agreeing with IE.
Anyway, there is still the rest of the joke - the fact that Internet Explorer is almost 10 years late with this post. If it isn't obvious it is saying that internet explorer is old.
internet explorer meme