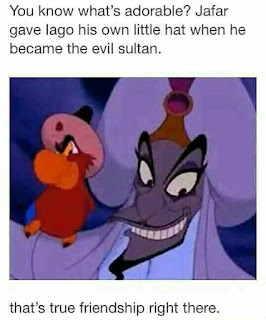 This is a meme about Disney's Aladdin. I chuckled when I saw it, so I decided to try and figure out why it was funny. The memester describes Jafar and Iago as adorable, and true friends in this meme.
I doubt that many people would find either of these bojos adorable, and Jafar is constantly physically and mentally abusive to Iago, while Iago is snide and sarcastic back to Jafar, so the reason why I found this funny was because it was a 100% blatant lie.
It does raise the question "Why did Jafar give Iago a hat in that scene?", but this isn't movie explainer, just joke explainer, so I'm gonna give that one a miss.
Disney lie