There is a light at the end of the tunnel 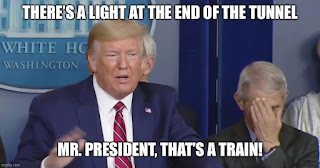 This is another Trump Meme. This meme is a reference to a popular joke by Robert Lowell - "The light at the end of the tunnel is just the light of an oncoming train."
First I'll explain the joke, and then the meme. If you were in a long tunnel, and you saw a light ahead, you would assume that it was the end of the tunnel, and that you would be out soon. People don't like being in the dark, so this is a looked-forward-to event, but if the light were an oncoming train, instead of being excited, or relieved, you should be scared that it will hit you.
This is an example of irony - the thing that you are looking forward to is in fact going to kill you.
Now, to go back to the meme - this is in reference to the Covid-19 pandemic. Trump is saying that things will soon be better, and the dude in the background appears to be smacking his head, or at least covering his face, and saying that we are all going to die.
It is particularly funny because that guy is actually Anthony Fauci - the director of the National Institute of Allergy and Infectious Diseases.
So, this meme is funny in a dark sort of way - the guy that is leading us thinks that things are sunshine and daises and the guy that actually knows is gritting his teeth.
black dark irony meme trump trump meme