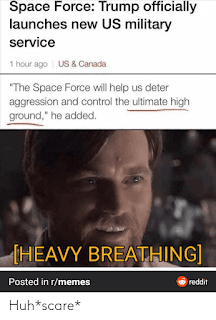 Here is another Trump meme, but this one is a star wars meme as well. The joke here is that when Obiwan Kenobi was fighting Anakin Skywalker, he says "it's over Anakin, I have the high ground", and then chops off 3 of his 4 limbs and leaves him for dead in the lava.
This joke is referencing that moment, and combined with the picture, seems to indicate that Obiwan is excited that the space force will be taking the ultimate high ground. Probably because it would mean that they could chop off even more limbs than is usual.
This is a bit of a running gag, because people talk about obi wan in connection with the high ground all the time - in fact I bet I could come up with at least a month worth of high ground memes if I wanted to.
meme star wars trump trump meme