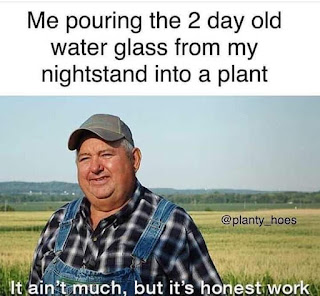 Here is an "It ain't much, but it's honest work" meme. In this style of meme, the standard form is to say something that you do that doesn't reward you much, but which you do anyway, and then show the image. stating "It ain't much, but it's honest work"
This meme is funny because pouring two day old water into a plant seems like a pretty lazy way to water your houseplants, but really, the plants probably don't care what they are watered with, so the plants will live anyway.
lazy meme