They can't cast mail in ballots if they are dead 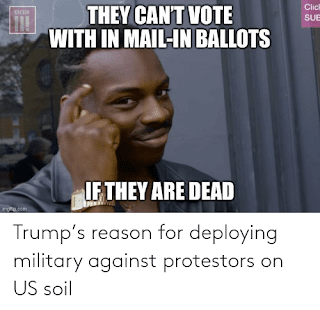 This is the last Trump Meme that I am going to do for a while. This is also a roll safe meme - because apparently that is the name of the guy on the meme.
This is an example of black humor, or dark humor because it makes light of murder. The joke in a roll safe meme is usually that this guy just came up with an awesome and simple plan to fix his problems, but that the plan is usually pretty stupid when you really think about it.
So, this meme is indicating that Trump's plan for preventing people from voting is to kill them all. It assumes that Trump is self aware enough that he realizes that he will probably lose this election if people vote in it.
This is funny because it makes Trump look stupid because that is his best plan for dealing with the fact that he is an unpopular president.
black dark trump trump meme