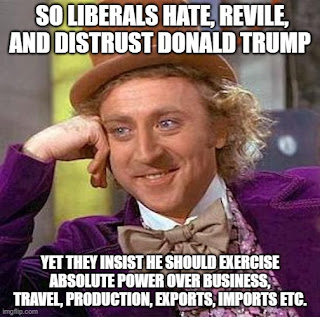 This is a Trump meme, and also an example of a Condescending Willy Wonka meme. It is an example of irony because it points out that liberals distrust Trump, and that they are also calling for him to take more direct control of the economy.
The thought is that if they don't trust him, it makes no sense for them to want him to be in control of things.
This is also a pretty rare Trump meme because it doesn't have an image of trump making a stupid face on it.
irony meme trump trump meme