Showing posts from 2021
Show all

A man's car breaks down in the middle of the night...

- September 04, 2021
A man's car breaks down in the middle of the night. He knows the area well and realizes that the quickest way to the nearest service station is through an old graveyard. He's walking along the headstones when in the distance he hears a faint tapping noise. As he gets deeper into the graveyard, the eerie tapping gets louder and louder. He very anxiously turns a corner and sees the source of the tapping is an old man with a hammer and chisel, hunched over a headstone. Relief washes over him and he says, "I was beginning to freak out because of that noise. I thought this place might have been haunted. What on earth are you doing here so late at night anyway?" The old man merely continues chiseling and says "They spelled my name wrong." This is both a ghost story and a joke. It is supposed to be both funny and scary. The start of the story is fairly normal for a ghost story, but when the old man says "They spelled my name wrong" you are supposed to ide
2 comments
Read more

"I have a split personality," said Tom...

- August 23, 2021
"I have a split personality," said Tom, being frank. This is a pun. The joke here is centered on the word 'Frank'. Frank can be an adjective which means "open, honest and direct", but it can also be a person's first name, and if Tom has multiple personalities, then he could be both frank (as an adjective), and Frank as a proper noun. This joke would also work with the name Earnest, and is also the lynchpin of the play "The Importance of Being Earnest." I suppose that it also bears mentioning that this is a joke about mental disorders. I find this joke to be highly amusing.
Post a Comment
Read more

My wife told me to take the spider out instead of killing it...

- August 21, 2021
My Grand dad's last words were "Are you still holding the ladder?" This is an example of dark humor. The joke as it currently stands tells the start of the story, indicates that the grandfather died, and leaves you to guess how that occurred. The implied full story is that the grandfather asked if the jokester was holding the ladder, and then fell to his death because the jokester was not in fact holding the ladder. Weather the jokester intentionally killed his grandfather is left up to the reader to decide, however it is obvious that at a bare minimum the jokester is guilty of negligent homicide. I find this joke to be pretty funny - not telling the whole story makes the user puzzle out what actually happened, and that work makes it funnier.
Post a Comment
Read more

Nothing rhymes with orange

- February 05, 2021
I'm in a really bad place right now.... Not mentally, I've just found myself in ****ing Utah. This is an insult, a pun, a joke with a swear word in it, and also a joke with an unexpected ending. The insult is obvious - the jokester doesn't like Utah. Insults are humorous, so that contributes to the humor. Swear words are also considered humorous, and so that would also contribute to the humor. Finally, the setup gets you thinking about mental health, and the unexpected ending of the joke makes you realize that the phrase "in a bad place" (which is usually used to indicate that the person is feeling severely depressed) actually was being used literally, and is therefore a pun.
Post a Comment
Read more 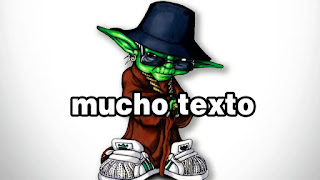 This meme is a reaction meme, however it is also humorous. The reaction meme is used in a manner equivalent to the response TLDR (which means Too Long; Didn't Read) to indicate that the thing that was previously posted was too long, and that the poster didn't read it. The humor is due to the random nature of having yoda dressed up as a gangster and speaking spanish. Even if the words are Spanish I think that most English speakers could understand them since mucho is a common word, and texto is an obvious cognate to the word text.
Post a Comment
Read more
More posts