Showing posts from April, 2017
Show all

Two strings walk into a bar and sit down

- April 28, 2017
Two strings walk into a bar and sit down. The bartender says, “So what’ll it be?” The first string says, “I think I’ll have a beer quag fulk boorg jdk^CjfdLk jk3s d#f67howe%^U r89nvy~~owmc63^Dz x.xvcu” “Please excuse my friend,” the second string says, “He isn’t null-terminated.”
Post a Comment
Read more

A common programming solution is to use threads

- April 26, 2017
A common programming solution is to use threads. But then, two ‘llyou hav erpoblesm.
Post a Comment
Read more

Why did the programmer quit his job?

- April 14, 2017
"It should be noted that no ethically-trained software engineer would ever consent to write a DestroyBaghdad procedure. Basic professional ethics would instead require him to write a DestroyCity procedure, to which Baghdad could be given as a parameter." - Nathaniel Borenstein
Post a Comment
Read more

- April 12, 2017
If you put a million monkeys at a million keyboards, one of them will eventually write a Java program. The rest of them will write Perl programs.
1 comment
Read more

A physicist, an engineer and a programmer were in a car...

- April 10, 2017
A physicist, an engineer and a programmer were in a car driving over a steep alpine pass when the brakes failed. The car was getting faster and faster, they were struggling to get round the corners and once or twice only the feeble crash barrier saved them from crashing down the side of the mountain. They were sure they were all going to die, when suddenly they spotted an escape lane. They pulled into the escape lane, and came safely to a halt. The physicist said "We need to model the friction in the brake pads and the resultant temperature rise, see if we can work out why they failed". The engineer said "I think I've got a few spanners in the back. I'll take a look and see if I can work out what's wrong". The programmer said "Why don't we get going again and see if it's reproducible?"
1 comment
Read more

How many programmers does it take to change a light bulb?

- April 07, 2017
Q: How many programmers does it take to change a light bulb? A: None, that's a hardware problem
3 comments
Read more

A SQL query goes into a bar, walks up to two tables and asks... 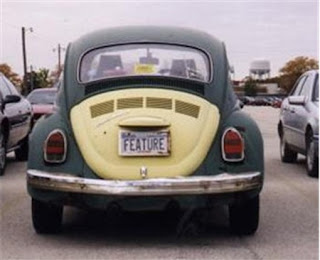