Saw a book on how to resolve 50% of your problems 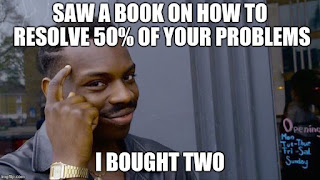 This is another example of a roll safe meme. The joke here is that the guy thinks that if one book can resolve 50% of all his problems that two copies of the book would resolve all of them.
First of all it is sort of absurd that a book would be able to mathematically declare that it would solve half of all of your problems. How does the author know what problems the reader has, or how many of them? What if there are an odd number of problems?
Secondly, if one copy of a book solves half of your problems, it seems like another copy of the book logically would be identically printed, and so it would resolve the same problems over again, and therefore be useless.
The knowing look that he is giving the reader is also a bit funny - it juxtaposes with the stupidity of the things that he is saying nicely - makes it that much funnier.
So, to sum the humor of this up: This is using absurd logic, and makes the guy that is saying it look stupid. The look on his face makes it even better.
Now, as a side note - this isn't really a standard format for a roll safe meme - the usual message in a roll safe meme follows the pattern "[person] can't [x] if [y]", so this is a little bit of a rare meme, since it doesn't follow that pattern.
absurd meme stupid