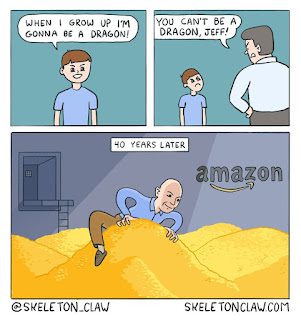 This image was taken from Skeletonclaw.com - I am just including it so that I can easily refer to it as I explain the humor in this comic.

The joke takes the form of a short story wherein a child is seen declaring that he wants to be a dragon when he grows up, being told that he cannot be a dragon, and then, 40 years later crawling over a mound of treasure.

The child is called Jeff, and since he is in a vault of treasure at the end of the comic that has amazon painted on the inside of it, we are supposed to assume that he is Jeff Bezos.

Now, the humor in this comic lies in the fact that the kid who wanted to be a dragon is able to (in the end) act like a dragon by crawling around in a huge pile of treasure. The implication here is that the kid never gave up his childhood dream of becoming a dragon.

This is sort of funny but it is also sort of heartwarming. The idea that Jeff Bezos wanted to be a dragon so bad that he made a hugely profitable business and made tons of money is the fulfilling of a kids deepest desire, and is heartwarming, but also the absurdity of an adult pretending to be a dragon is where the humor kicks in.

There is also a little bit of humor in the way that Jeff looks in the last panel. He is crawling like he is actually a dragon, not like a human. The look of concentration on his face is funny, and he is also bald.