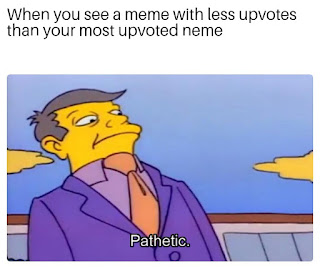 This meme is generally used to point out when someone is feeling prideful about something. The character in the meme is Principal Skinner from the Simpsons tv show, and he is looking down upon something that is off screen. That being said, this meme can also use other images with the same caption
In this instance, the joke refers to the feeling of superiority that one gets when noticing that they have made a more popular meme than someone else. It is poking fun at that feeling, and pointing out that it is prideful.
I don't think that this was supposed to be funny - instead it seems like commentary on people's behavior, however if I had to come up with a reason why it is funny, that reason would be because it is making fun of the person that is feeling superior, and pointing out how petty it is.
insult meme petty