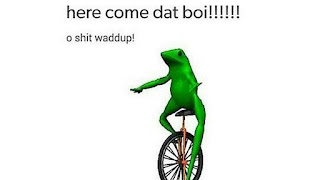 I guess that since I referenced "dat boi" in my last post, I should explain the "dat boi" meme. First of all, "dat boi" is a misspelling of "that boy". This meme is usually accompanied by an image of a frog on a unicycle, and someone usually responds to the image with the phrase "o shit waddup!", as if greeting dat boi.
The humor here is basically absurd in nature. to refer to someone as "that boy" would indicate that the people that are discussing him should all know who it is they are talking about, and this frog is pretty much just some random frog on a unicycle, and no-one knows who he is or anything about him.
He is only notable in that he is notable, and that is sort of funny.
meme