I Said a Space Force 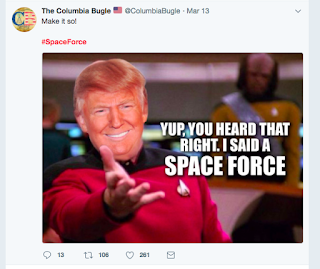 This is another Trump meme. It is about Trump's Space Force. It has a picture of the captain of the ss enterprise, which is from Star Trek, but his head is replaced by the head of Trump. I can't really see exactly why this is supposed to be funny - I suppose that it must be because of the absurdity of imagining Trump as the leader of the starship enterprise?
Usually the captain of the enterprise is very good at what he does, and capable of handling any situation, so this isn't an insult like it would be if they posted his face over that of a character that was a total loser.
I guess another possible angle for this one is that Star Trek is imaginary, and they are adding in trump to it because his space force is also imaginary?
Honestly, this one has me baffled. I think that I spent more time thinking about it than the creator of it spent photoshopping it.
Anyway - if you have any idea, feel free to post it here. I would love to update this with a better answer.
meme trump trump meme