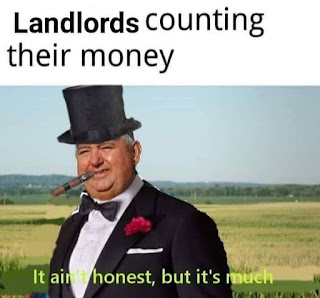 This is an "It ain't much, but it's honest work" meme, however this one is a reverse of how the meme usually goes. An "It ain't much, but it's honest work" meme usually is used to show something that the poster does which is rewarding despite not being lucrative, but this one points out how landlords don't do much but get paid a lot.
Having never been a landlord, I don't know if that is true, however that sentiment is understandable among people that rent
The humor in this meme is the unexpectedness of the reversal, the fact that it is an insult to the landlord, and the poor quality of the photoshop job.
insult meme unexpected work