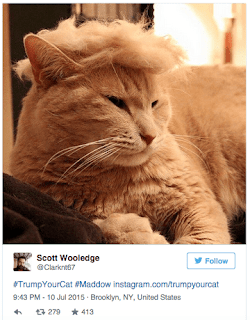 This is Day 7 of Trump Memes, and the final day of the original week. That being said, I am now heavily considering making June a full month of Trump memes if I don't get bored first.
The joke in this one is that the cat has hair on his head that looks like Trump's hair - sort of.
This one is also sort of funny to me in actuality, but it is probably because the cat looks smug, and also like it likes having a toupee of fake hair on its head.
It is sort of absurd to have a cat that looks like Trump, and I am not actually sure if it is supposed to be insulting to trump or if it isn't supposed to be.
Finally, this is one of the rare Trump memes that doesn't include a picture of Trump making a dumb face.
absurd cat meme trump trump meme