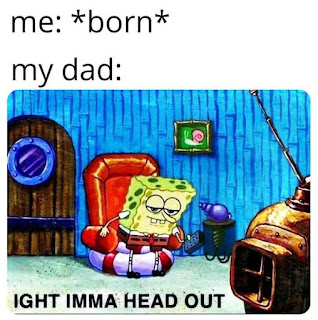 This is a "IGHT IMMA HEAD OUT" meme. It deals with themes of fatherly abandonment, so it might be considered a bit dark. The humor in this meme is two fold - people pointing out painful things is often used as a source of humor, and having your father abandon you is a painful thing, so some people might find that humorous.
The second thing that is funny about it is the dissonance between the idea of spongebob squarepants and fatherly abandonment are so far removed from each other, that seeing a picture of spongebob and reading a caption about such a painful topic is jarring.
dark meme