When you're a gold digger... 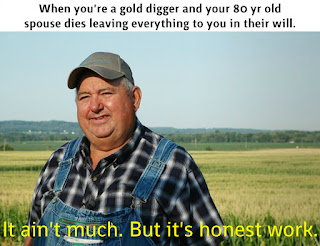 This is a subversion of an "It ain't much, but it's honest work" meme - normally when creating a meme of this sort the memester will select a occupation that takes a lot of effort and pays little in return, but which is valuable to society as a whole.
It is usually used as a sort of a humble brag.
In this case, however, the memester instead chose to outline an occupation that they see as being not much work, dishonest, not valuable to society, and very lucrative.
Instead of bragging, this is insulting gold diggers, and thus turning the whole meme format on its head, and because of that, it is pretty funny.
funny insult meme subversion