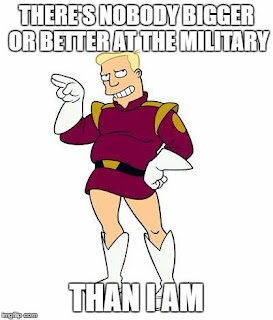 Here is another Trump meme - this one is just an image of Zapp Brannigan, a character from the TV show Futurama and a quote from Trump. it seems that Zapp must be a doofus of some sort, and this is an insult directed at Trump - by making it seem like they are quotes by a comic relief character from a funny tv show, they poke fun at how dumb this quote is.
I am assuming that Zapp is an idiot because it looks like he is - if he is not an idiot than I am not sure why this meme is supposed to be funny.
As a side note, this is probably also calling Trump a liar (because he never served in the military), and this is also an example of hyperbole, but honestly both of those are pretty normal for Trump, and not particularly funny.
hyperbole hypocrite