What if we paint the Mexican flag in the office? 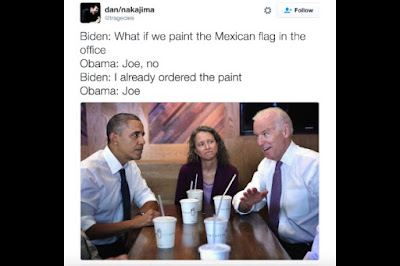 This is another Joe Biden meme - In this meme, Biden is telling about a plan that he has to troll Trump. Obama is playing the straight man as always, and trying to get him to stop. I can find three sources of humor in the meme - one is that someone that is an adult, and a public figure (who is supposed to act in a mature manner) is instead acting so immature. Another source of humor is that Trump has repeatedly showed that he is very anti-mexico, so this would be a very rude thing to do.
Finally, the image itself is also funny - it really looks like Obama is acting serious, and that Biden is trying to convince him to troll Trump - how did they find such a good still?
Biden immature meme mexico obama rude troll trump