Within a couple of days... 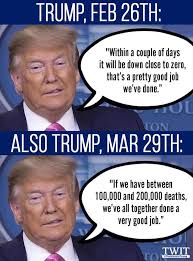 This is another Trump meme - The humor in this meme is that it is insulting Trump. Trump made a failed prediction on February 26th, and on March 29th he said that we are doing good if 100k to 200k people dies (but presumably not more than that).
In both instances Trump says that we are doing a good job.
The unstated assumption of the person that created the meme is that we are not in fact doing a good job, and that Trump either doesn't know that, or is not willing to say it.
This isn't really funny at all to me.
meme political trump trump meme