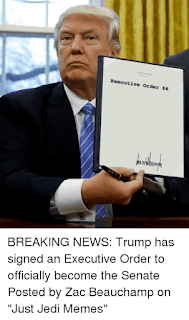 This is a Trump meme that is also a Star Wars meme. Order 66 is the secret order that Palpatine had implanted into the clone troopers in star wars which would cause them to kill all of the Jedi.
This is more scary than funny, because if Trump could become the senate, and take over the entire government, I think that he probably would.
That being said, imagining Trump as Palpatine is sort of funny.
meme trump trump meme